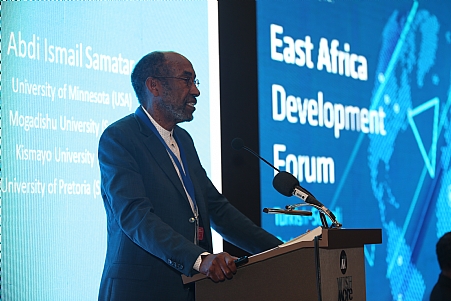 The foundations of Turkish-African Relations Session

Prof.Dr. Abdi Ismail Samatar was the keynote Speaker of the session. He is a professor of geography at the university of Minnesota, he authored several well-known books and published numerous articles. He presented a lecture titled on African Development is for Africans.

In his lecture he articulated the stages that African economy passed through from pre-colonial, post-colonial capitalism, the stage of the neo-liberal. He talked about the paradox of the colonial economy, the neo-liberal and the reality of the continent which led to a vicious circle for the past decades. He stressed how the colonial economy was structured only to persist the dependence not for the interest of the people in the continent. States in the post-colonial failed to transform the economy from disarticulated to articulated economy which is based on the production and consumption, furthermore the economy became degenerative or worse than the colonial one.

Also, he talked about how the education in the colonial era was structured to maintain the colony rather than to create a transformation. He emphasized the need for new approach which corresponds with the facts and the requirements of the continent.in order to tackle the poverty and depravation he talked about the importance of an articulated and inclusive economy for Africa.

While summing up the Africa problems Samatar mentioned some very important issues like leaders who lucks the legitimacy and credibility to lead, the states with no vision which are also less capable to form a new chart for acting on collective continental issues, economy that has failed to provide productive jobs and living wages for the majority, fragmented continent and deep skills deficit, and finally enormous underused natural resources.

When he was talking the opportunities, Mr. Samatar underlined the huge growing population of the continent which could be a very pushing forward factor if they are equipped  skills and knowledge. In the energy sector there is a huge opportunity where there is an increasing demand for the electricity especially Africa has the resources for producing energy whether its oil reserves, rivers and lakes which allows for the continent to be in leading position in the hydroelectric, wind and solar energy.

In his conclusion he mentioned that Instead of doing every business it’s better for Africa to focus on very few areas across the continent like agriculture and food sector by putting the required policies in place and preparing the infrastructure. Also, he laid out the importance of the interdependence between African countries in every sector rather than been dependent to other countries like china or India by enabling the African companies and firms to undertake the projects whether its mini or mega ones.