The recent wave of military coups in West Africa 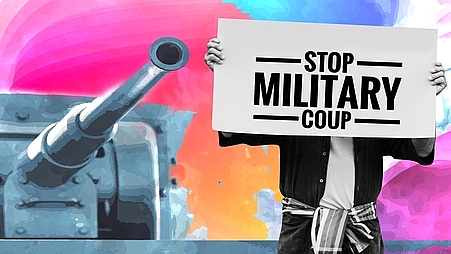 The wave of the military coups that have swept Africa – mostly in the western part of the continent has raised concern among the continent`s leaders as well as the international community, particularly at a time when the continent is struggling to deal with the impact of the pandemic.The  military coups have also inspired a plethora of deliberations in the media about the extent to which the African nations are vulnerable to a recurring extreme political shake-up that stems from state failure, while others considered it a litmus test for external actors` responses and the role that multilateral organizations can play. Until now, the international community has failed to take bold and decisive measures against coup plotters in six African nations. As usual, China and Russia maintained their position of barring the United Nations Security Council from what they call an "intervention of the internal affairs of the countries." On the other hand, the African Union (AU) and the Economic Community of Western African Countries (ECOWAS), which has 15 member countries under its umbrella, imposed some modest sanctions.

The story started with Mali when, in August 2021, self-righteous soldiers staged a coup and arrested former President Ibrahim Boubacar Keita, who had failed to come to terms with his political opponents. Later a timetable was proposed by the military leaders who extended the transition period to five years, which meant that the military will transfer power to civilian rule after five years. Initially, the transition was period was set at 18 months. Thereafter, coups and coup attempts have become a norm in the region. Acoup attempt unfolded in Niger in March 2021 and after a few months, Guinea`s military succeeded in overthrowing the president who removed the presidential term limit to be reelected for a third term in office in late 2020. Also, in 2021, the Sudanese military took power and dissolved the transitional government over what the military called an incessant quarrel among political elites who came to the power after a revolution that deposed the long-time ruler, President Omar al-Bashir.

In Chad, the linchpin country of counterterrorism in the Sahel region, soon after the death of former President Idriss Deby on the front lines while fighting rebels, the military installed Debi’s 37 year-old-son in an unconstitutional fashion. The latest station that the coup journey reached was Burkina Faso where in January 2022 the military announced the overthrow of the government of President Roch Marc Christian Kabore. The military dissolved parliament and froze the constitution and designated coup leader Paul Henri Sandaogo Damiba as the transitional president of the state. The military coups don`t occur on their own but due to internal dynamics that make certain countries conducive for usurpation of power by the military. Most countries that have witnessed military coups, like the majority of African states, have been facing political and security turmoil embodied in communal violence, armed factions and political deadlocks over resource and power-sharing. A close examination of the situation reveals one outstanding cause behind the ordeal, which is the patrimonial-based system of the state. Thus, the rules of the political marketplace rule every angle of government management. The bad governance not only led to a political deadlock between the elites and between the center and the periphery but also sharpened an interethnic conflict in the rural area over the meager resources. As a result, an armed insurgence emerged to uproot the states by exploiting the eroded trust of people in their states and the lack of sense of togetherness within the societies.

In fact, in these countries, the state authority exists in the capital city and somewhat in the surrounding areas, but in the rural and periphery, the armed factions – though with diverging backgrounds and agendas – are operating in full swing. For instance, one of the justifications that Burkina Faso’s military propagated after staging the coup was the former president`s failure to contain growing armed violence against the state. It was also his inability to protect the lives of the soldiers on the front lines who suffered severe setbacks as hundreds were killed because they were underequipped to face their enemy. The armed groups have been active in much of northern Mali, Chad and Sudan, which has left millions of people at the mercy of warring sides and caused one of the world`s worst humanitarian crises.

Since 2013 there has been a multilateral military campaign led by France, the former colonial power. The campaign unites foreign forces, and armed forces of the region`s states aimed to halt the advance of armed militia and prevent a total collapse. While the operation succeeded in saving states from total collapse, it failed to achieve tangible results on pivotal issues like the return of state authority to rural areas, offering basic needs to citizens and governance overhaul.  After nearly 10 years, the military operation against the insurgents ended in total fiasco and France started to scale down its military personnel in four countries in the Sahel region. The failure of the operation led by France gave a chance to the notorious Russian mercenary Wagner Group to have a presence in the region. The reception of the mercenaries by the Malian government heightened diplomatic rows between the French government and coup makers, which culminated with the expulsion of France`s ambassador in Mali’s capital Bamako. What is surprising is how the citizens of some countries welcomed the putschist leaders with jubilation. According to a vast majority of people, the military saved them from savage political elites. Actually, such a public perspective shows the high stakes of turning away from severe flaws in the governance system in favor of other minor issues, which will precipitate the downslide toward total collapse.

The states in the region have been receiving paramount military and financial support in order the contain the armed militia for the last decade; however, little was paid by the international community to solve the root causes behind the insurgence in the first place. Hence, while the war on terror was gathering pace, democratic consolidation, good governance and tackling the impacts of climate change took a back seat. To fix the current wave of anti-democracy in Africa, the international community should use its leverage and pressure to push for a civilian-led interim administration with clear mandates that lead to local, parliamentary and presidential elections in the shortest possible time. Without genuine reformation that aims to hammer out a legitimate and accountable system and offer basic service to the citizens, the ongoing militaristic trend will have a drastic domino effect on the region and on the wider continent.